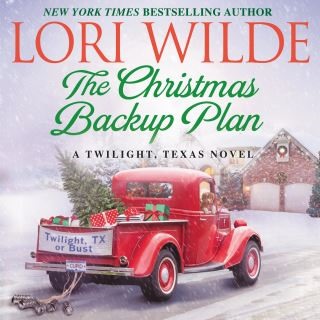 You are cordially invited to a Twilight, Texas, Christmas Wedding! The town is decorated, the cookies are made, and the stage is set . . . for love.

Wedding planner Aria Alzate has one goal: to give her best friend a perfect day. But after a bump on the head, she’s under doctor’s orders not to travel on her own. So she’s stuck on the road to Twilight with upright, uptight Remington Lockhart in the driver’s seat. True, Remy is one long, tall, Texas male, but the ex-military man never saw a rule he didn’t like—making this one long road trip . . .

Remy has left the military, but the military lifestyle has not left him. The uncertainty this ex-paratrooper encountered during his tour of duty has convinced him that plans—combined with backup plans—will keep life under control. Aria is undeniably tempting, but her fly-by-the-seat of her pants attitude is never going to work.

Then a sudden snowstorm strikes, and these opposites come together in a night of unexpected passion. And suddenly the magic of a Twilight, Texas, Christmas takes hold, proving that sometimes the best plan is to have no plan at all.

Lori Wilde is the New York Times, USA Today and Publishers’ Weekly bestselling author of 87 works of romantic fiction. She’s a three-time Romance Writers’ of America RITA finalist and has four times been nominated for Romantic Times Readers’ Choice Award. She has won numerous other awards as well. Her books have been translated into 26 languages, with more than four million copies of her books sold worldwide. Her breakout novel, The First Love Cookie Club, has been optioned for a TV movie.

Lori is a registered nurse with a BSN from Texas Christian University. She holds a certificate in forensics and is also a certified yoga instructor.

A fifth-generation Texan, Lori lives with her husband, Bill, in the Cutting Horse Capital of the World; where they run Epiphany Orchards, a writing/creativity retreat for the care and enrichment of the artistic soul.